You are here: Home / Case Studies / Case Study: Validating Culture with HR Analytics – How to not have Culture eats Strategy for breakfast scenario !

‘Culture eats strategy for breakfast’, technology for lunch, and products for dinner, all of this without a burp – while building a case for it’s veracity & impact, validating it with data & HR Analytics, we also attempt to trace the origin of this significant premise, over the course of this read. (Also see, HR Analytics Case studies, Organizational Dysfunctions & HBR featured The Culture Factor)

The Client organization, a high growth organization, has defined their cultural premise (& expected behaviors critical for success) to be driven by learning, creative and innovative (Also see, Organizational Stages & Presets: Why a lot of successful organization often under-achieve?). Defining it is one thing & putting it into practice & part of the gratification model is altogether another. From our discussions & initial dataset provided (included motivational inventory scores, employee performance, HRIS data, employee engagement etc.), we pointed out that there existed anomalies, which were creating talent pipeline problems, by design.

The dataset pointed out that employees who were creative and innovative were leaving the organization, it means that something was not right (this correlated with dip in revenues per employee, effecting the culture eats strategy axiom) by design. Furthermore, the data revealed that employees who are more likely to stay had motivation for power & recognition. These revelations were a good starting point to revisit organizational practices, realigning the culture and human capital practices.

From the dataset provided, we mapped the grade of each employee (active & attrited) and scores per each of 16 motivational drivers:

Does Culture eats Strategy for breakfast in this case ??

Applying statistical analysis to the subsetted dataset (16 motivation drivers & 1 attrition), it became clear that 4 motivational drivers show more or less good discriminative ability (statistical significance): Perfection (p-value<0.001!), Serving, Affiliation and Stability. While each motivational driver is measured by a discrete 10-point scale and considering the small dataset we had, to identify patterns, we aggregated each motivational scale to quartiles, and this is what showed up: A beautiful picture, not just worth thousand words, but also thousand insights. 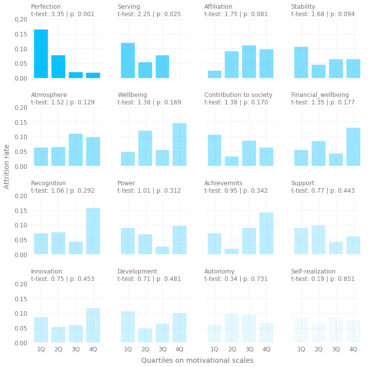 Looking at the model results, we can definitely infer that the organizational culture is more skewed towards “Perfection” ,“Serving”, “Stability” and ‘Affiliation’, in that order, as against the intended & desirable one, which drawing from motivational attributes table, should be Achievements, Innovation, Autonomy etc, in the priority order as mentioned. Infact, the currently exhibited attributes are conflicting to the desired ones & definitely be having counterproductive effects on business & organizational performance.

To conclude, validated with datasets, culture eats strategy for a hearty breakfast in the referenced case, calling for reflections & deliberated corrections over time.

Yes, I am Excited. Let's get started !

See how we do it

Please log in again. The login page will open in a new tab. After logging in you can close it and return to this page.